Friends may very well have gone down in history as one of the greatest sitcoms of all time, still remaining relevant today as new generations are introduced to the series, but that doesn’t mean that the show didn’t have a few bad episodes every now and then.

RELATED: Friends: 5 Worst Things Joey Did To Chandler (& 5 Chandler Did To Joey)

With lengthy seasons, there was always bound to be one or two that slipped through the cracks and that was the case. Even though Friends was an incredibly consistent show, there were still several episodes that didn’t hit the mark.

Within this list, we will take a look at those episodes, revealing the worst episode from each season, according to IMDb, with the lowest-rated episode from all 10 seasons being revealed.

The lowest-rated episode from the original season of Friends is ‘The One With The Ick Factor,’ which scored a rating of 7.9 on IMDb, and spends a large amount of time focusing on Monica and her latest relationship, which leads her to have an icky feeling.

Monica finds out that her boyfriend is actually a high school student partway through the episode, which doesn’t sit well with her, and this leads to them breaking up by the end.

In addition to that, Chandler learns that nobody in his work actually likes him after Phoebe temps as his secretary, with the pair trying to create a plan to make people actually like him.

The lowest-rated episode of season two is ‘The One With Phoebe’s Husband,’ which has a rating of 8.0 on IMDb, which highlights just how consistent that the second season of the show actually was, with the worst episode having such a strong score.

During this episode, the gang find out that Phoebe is actually married, to a gay Canadian ice dancer who needed a green card. It is one of the stranger revelations about her throughout the show, and one that fans didn’t really enjoy.

This leads to secrets of the group all being revealed in a hilarious moment, while Rachel gives Ross terrible advice about his relationship with Julie, in an attempt to sabotage them.

For season three, the lowest-rated episode ended up being ‘The One With Phoebe’s Ex-Partner, which was rated 7.9 on IMDb. This episode focuses firmly on Phoebe as her former singing partner appeared, believing that Smelly Cat has real potential.

There is also a subplot about Chandler ends up dating someone with a prosthetic leg, which leads to some comedic moments as he tries to look past it, but struggles. 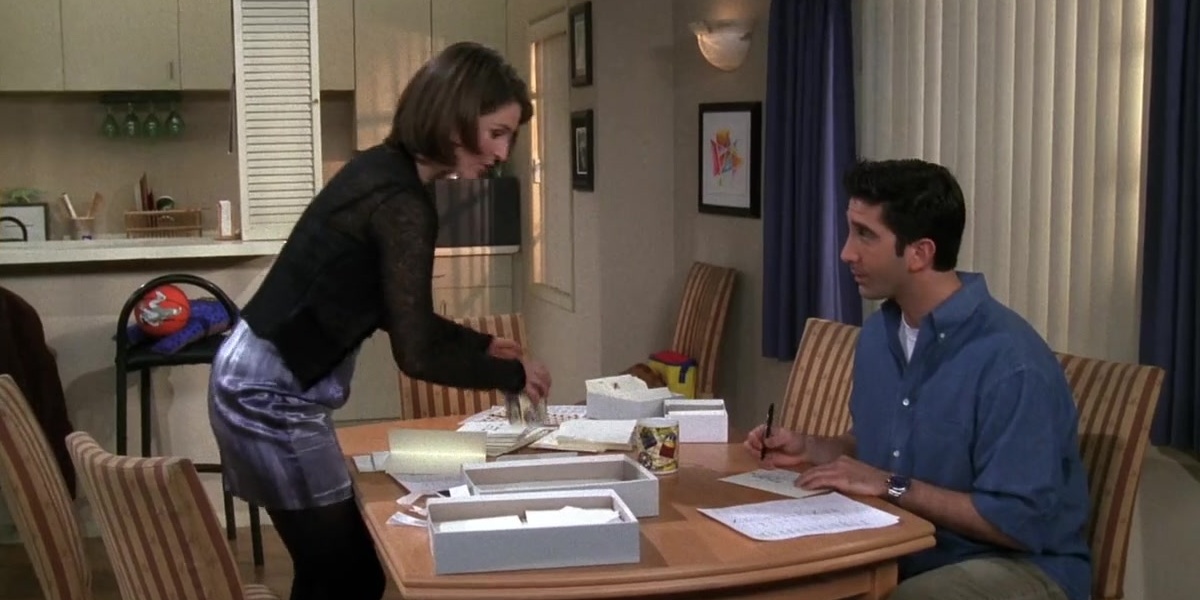 It isn’t a major surprise to see that “The One With The Invitation” is the lowest rated episode of season four, with a score of 7.2 on IMDb, as this is a clip episode that spends the majority of its time showing old clips from previous episodes.

Ross and Emily are frantically working out their wedding invitations, which leads to them discussing whether or not they will be inviting Rachel to the wedding, which leads to them both looking back at their relationship together, showing lots of old clips from their past together.

The lowest-rated episode of season five, which still managed to score an IMDb rating of 8.0, is ‘The One Where Rachel Smokes,’ which sees Rachel take up the habit despite the fact she isn’t a smoker simply because she wants to be more included at work.

Away from Rachel’s storyline, Joey ends up auditioning for a soup commercial with Ross’s son, Ben, but they end up competing against each other, which leads to some tension between Joey and Ross.

The episode also finds Monica and Phoebe plan a surprise birthday party for Rachel, however, they are doing it a whole month in advance.

Despite being the lowest-rated episode of season six, ‘The One With Mac And C.H.E.E.S.E.’ is a hilarious episode that is full of brilliant moments from the show as Joey prepares for an audition in a lead role on a popular TV show.

With Joey frantically preparing for his first major role since Days Of Our Lives, he ends up not being told that the time of his audition had changed because Chandler forgets to write the message down on the board for him.

RELATED: Friends: The 10 Worst Things The Gang Did To Ross

This leads to the group thinking back about various times that they have let each other down, in what is essentially an episode full of past clips from previous seasons.

‘The One With The Vows’ scored 7.5 on IMDb, the lowest-rated episode of season seven, as the show begins to prepare for the huge wedding between Monica and Chandler at the end of the season.

This is a clip episode of Friends, meaning that the vast majority of this particular episode is spent in the past looking at former moments between Chandler and Monica in particular as they begin to write their vows.

Neither of them truly knows what to write about and because of that, they think about moments from their past and how they have got to this stage in their lives.

‘The One With Joey’s Interview’ is the lowest-rated episode of season eight on Friends, gaining a score of 7.5 from IMDb, with this episode firmly focusing on Joey as he prepares himself for the biggest interview of his acting career.

Joey has an interview with Soap Opera Digest but begins to doubt himself about whether or not he is good enough to get the job, which leads to him thinking about past experiences.

That is the main reason why this episode is rated the lowest, as a good chunk of time is spent focusing on past clips from old episodes, as Friends tends to do every now and then.

The lowest rated episode of season nine, ‘The One With Christmas In Tulsa’, has a rating of 7.5 from IMDb, and mainly focuses on the relationship between Monica and Chandler, and he had to spend Christmas in Tulsa, as the title might suggest.

Chandler can’t be home for the holidays because of work, and when Monica finds out that a former Miss Oklahoma runner-up is going to be with her husband, she immediately worries about him cheating.

However, while she does flirt, Chandler remains incredibly loyal, so much so that he actually returns home early and reveals he has quit his job.

When it comes to the final season of Friends, the writers really did step things up to ensure that the show finished with a bang, which is highlighted by the fact that the lowest-rated episode of the season still scored 8 on IMDb.

During this episode, Chandler is finally caught out by the rest of the group about what he and Monica are planning in terms of leaving Manhattan to raise their family in a suburban home, eventually finding one in Westchester which they bid on.

Rachel and Phoebe spot Chandler with his realtor, Nancy, and believe that he is having an affair, but when the truth comes out, the group begin reminiscing about their time in New York. Because it is a lot of throwback clips, that is likely the reason it gained a slightly lower rating.